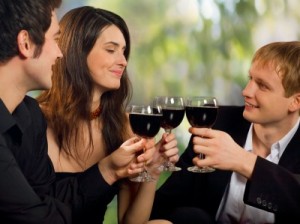 It is proven, that he was suffering from headaches 70% Poles, and approx 30% has them often. About 15% complains of migraine attacks, which attack women much more often than men. About 75% of them live in big cities, at the age of 30–45, with higher education, professionally active, zestresowane, breathing polluted air.

Scientists from the University of Berkeley developed the device, to protect against migraine headache, caused, among others. by red wine. It is often accompanied by palpitations and shortness of breath or nausea. Some people experience a spike in adrenaline and the so-called. hypertensive crisis.

The chemists used technology developed by NASA, that was supposed to make life on Mars detectable. Thanks to it, it is easy to "track down" substances responsible for causing unpleasant ailments, i.e. biogenic amines, compounds that occur across the range of maturing (aging), fermented or pickled products, e.g.. in cheeses, wine, smoked meat, olives, nuts, chocolate.

Despite the fact, that many analysts around the world did not agree, which substances actually trigger the migraine headache, the amines are the most frequently indicated, including tyramine and histamine. Therefore, doctors and nutritionists warn their patients, to eliminate foods rich in these compounds from their diet. Scientists have found, that the highest concentration of biogenic amines is found in red wine and sake, and the lowest in beer. For now, the device only tests liquids. You have to wait after applying a drop of wine 5 minutes for results. Scientists are currently working on reducing the camera, so that allergic people can take the digital assistant with them to a party or restaurant and check its composition before drinking wine.

Wine, jak i wino domowe to wspaniały i wyjątkowy trunek, however, its excess causes the same state of intoxication, like drinking too much vodka, beer or other drink with percentage. If you drink too much wine, you can get a headache.

Willing to protect myself from this unpleasant experience, you should be aware of this, at what rate should we consume alcohol, so that the body deals with it on a regular basis. Therefore, to drink wine without feeling intoxicated, heavy head, whether the legs should be drunk no more, than a glass of wine in an hour, because just or as much as 1 the body needs approx. 8 do 10 grams, in this case, wine, this is roughly the size of a wine glass.

Our body will not be able to break down quickly, this, what we'll drink in addition to that. As a result, we can make you feel sick, vomiting, headache and other symptoms commonly known as a hangover.

However, there are ways, to avoid these unpleasant ailments, and one of them is not only greater or lesser abstinence, but to learn about the mechanisms of action of our body in contact with alcohol

As is commonly known, the liver is responsible for the digestion of alcohol, connected with the bloodstream, so what it cannot cope with on an ongoing basis goes there and with the blood is transported to the brain and every other part of our body, hence the general malaise and the headache that often occurred at that time. It arises, when fluid pressure in the brain rises, due to the acetaldehyde they contain (partially processed alcohol ). This aldehyde is also very soluble in water, penetrating deep into the tissues and expanding the capillaries, which causes us to sweat.
It also makes itself felt through, fact, that in the brain, which is well supplied with blood, water with aldehyde is released from the cells, and has no outlet, creates hypertension, felt, as pain. We can also smell its excess, as the smell of not fully digested alcohol.

Unfortunately, the speed at which alcohol is broken down also depends on gender

And yes, men burn it faster than women, although, as you know, there are exceptions to each rule.

However, we do not have to give up enjoying the taste of our favorite drink, give up champagne fun with friends or family, because sometimes it's hard to sit all evening with one glass. The best way to deal with the effects of intoxication is to drink in moderation, and then the problem is simply "over the head".

It may also be enough to stock up on a medicine with acetylsalicylic acid (ingredient of each pain reliever tablet) and vitamins C and E., preferably in an effervescent form. Let us remember this, that smoking while drinking enhances the effects of alcohol.

Found on google via: