Gorzałka or the history and principles of firing strong drinks 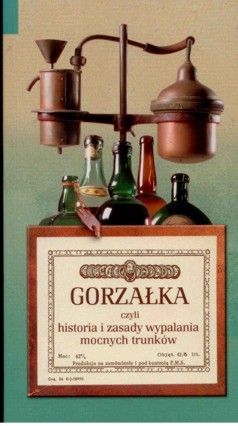 The author takes us on a historical journey to the sources of alcohol production. From Iw. before Christ, where Horace, Roman poet studying philosophy in Greece, wrote about the benefits of Greek wines.

Since then, all nations and cultures around the world have praised alcohol as an antidote to all ailments and ills of everyday life on earth.

In Iw. AD, Plutarch - the Greek historian and philosopher - has already written: “Wine is the most beneficial of all drinks , the most pleasant of medicines and the least harmful of all delicacies ".

The Romans recommended drinking alcoholic beverages while preaching, that these are certain, quick and pleasant remedies.

In Christian rituals, alcohol also played an important role, e.g.: during a wedding in Cana in Galilee where Jesus turns water into wine.

But the thread cannot beat the Jewish holidays.

For Orthodox Jews, drinking alcohol is an integral part of many religious holidays (which did not, that's cool? Religion recommends the consumption of alcohol). During the Purim festival, commemorating saving Jews from extermination in the Persian empire, it is a religious duty to drink alcohol until you pass out!

This wonderful historical journey through the world and various cultures ends in modern Europe, from the first records of the production of beer in Mesopotamia through the first trials of Arab alchemists and the rise Water of life to modern techniques of distillation and rectification of spirit.

Then we have very interesting descriptions of the formation of regional alcohols: cognac, armagnacs, grappa in France, malted barley whiskey in Ireland and Scotland, gin in England and genever in the Netherlands, and our grain booze in Poland.

Next, the author introduces us to the rules and practical tips for the correct distillation of alcohol, and how the distillation apparatus is constructed.

After this introduction, we move on to the specific provisions. From selecting the raw material for the mash, by selecting the appropriate types of distiller's yeast and ending with distillation.

“Yeast selection is an art, a nawet science.

Because it is the most important ingredient

Here it should be mentioned, that in all the recipes contained in the book, only yeast is mentioned and the term still yeast is not used. This is because of this, that in those days from which the rules come, there was no distillery yeast yet. Baker's yeast was used for fermentation, brewer's or wine yeast. Only the development of science made it, that new yeast strains used in distilleries had been isolated. Only the distillery yeast had a much higher efficiency, greater resistance to alcohol and no unpleasant yeast taste and smell in the booze.

By the way, reader, check in

survey which distillery yeast for booze is recommended in Poland!

The third part of the book (the most extensive) is a list of old and proven recipes for booze. We find recipes here:

how to process rye, barley, malt, corn or potatoes for spirit

how to prepare a mash for slivovitz

how to process fruit into spirit

how to prepare fruit vodka, herbal, sweetened, bitter and gastric

and many other very tasty recipes for interesting home-made vodkas.