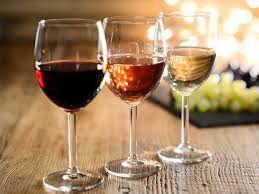 Wine – well it does, that the word sounds like a magic spell to my ears?.

The entry in the lexicon is cool and to the point: "Wine, an alcoholic drink obtained from fruit juices containing sugar, and more specifically – fermented grape juice as opposed to fruit wine, made from apples, pears and other fruits…”

This is all right and important, but it only describes in dry words this amazing process of conversion of one matter into another. However, he does bring back some memory from the earliest childhood.

I see, myself going uphill: I hold on to the hardened hand of an aged man. We pass old walls with round arches made of red and yellow sandstone and gray ones, rotten wooden door, steeped in the stunning scent of lilac and elderberry. It's a warm early summer day, we go up the street, until finally we approach one of the gates, leading to the basement: The gate is open. The stairs go down and disappear into the darkness., I don't want to go in there, I'm afraid of the dark, but the man laughs and pulls me behind him. Calms me down, he says, that someday I'll find out, what is stored here and what lives in barrels, I will mention him then and admit he is right; because such a cellar carved in a rock full of wine is the most wonderful thing right after paradise.

I did not understand any of this, what he argued about and what he explained to me, but in the dim light of the bulb I saw a basement room and barrels stacked in rows and piled on top of each other; large and medium, oval and round, and still quite small at the top, wciśnięte między wypukłości pękatych drewnianych antałków. Dopiero po pewnym czasie mogłem dojrzeć człowieka w niebieskim fartuchu, doing something to one of the barrels. He screwed a rubber hose to the jack placed on the bottom and hung it in a barrel. Then he climbed the ladder and the second snake, hanging on the opposite side of the jack, stuck-into another barrel. Then he grabbed a jack lever and began to move it back and forth. It gurgled, zaszumiało i te odgłosy bardzo mi się spodobały. Przetaczamy młode wino!"I looked up questioningly. “One barrel of wine is pumped into another barrel, you see " – said my guardian. Admittedly, I couldn't see anything, but I heard the murmur more clearly,fluid in the hose.

The murmur soon subsided, and in the end only the wine gurgled more strongly in the second barrel. My tutor suggested, to put my ear to the dark wood. I was so fascinated by this sound.

Now I was completely over the fear and looked around curiously around the basement.

Meanwhile, my guardian asked the man in the blue coat, could he have a glass, you have to try, did anything come of this fault. Immediately a small red snake was retrieved and hung from a thick barrel in a barrel. I could see from below, like the man on the ladder began to suck on one end of the hose, then he put his thumb over the hole and pointed it towards the bottle.

It spurted out and the bottle slowly filled with wine. "One glass is probably not enough for you?” – the man said and laughed, then he turned to me: “You want a little drink too?”

I nodded happily, and because it was during this time that I was learning to speak, I got out of myself blurry, but very unambiguous: "Drink, drink".

So I was handed a glass, admittedly only half full, and after a sip or two it was taken back from me.

Of course I don't remember anymore, did I really like it, but today in my family and in our village they are laughing at my first experiences in a wine cellar.

After the first visit to the basement, it was time for many more; I watched, how grapes are made into grape, I listened, how it gurgles in barrels, I inhaled the incomparable scent of wine autumn. He made sun-drenched villages in the hills of Rhineland-Palatinate and Hesse full of charm; autumn was intoxicating and gave flavor to gradual changes of cloudy, sweet juice, which eventually became clear, dry wine.

When i grew up, I also got to know vineyards. I could watch, how in spring, the shoots of the branches are pruned and attached to the wires. With my old neighbor, I traveled to distant crops, located up to the border, and while I was lying in the grass and basking in the sun, he used his hoe to smash the lumpy earth around each vine. From my seat, I had a vast view; before me there was a space with brown and green planes of fields and meadows, broken only by the dark spots of fruit trees, and the gentle slopes of the hills crossed the gentle lines of vineyards.