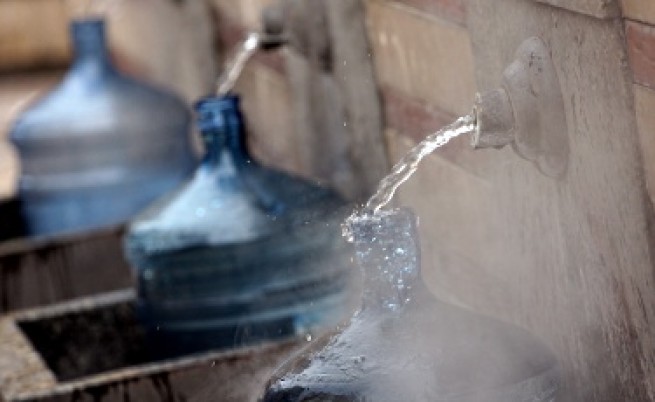 On hard days on crowded beaches, you think about quenching your thirst more than about food. Fortunately, there is no problem with that in Bulgaria. Perfect aside, produced under the license of 'schweppsy” with orange flavors, grapefruit and lemon, and Coca-Cola, mainly drinks should be mentioned, made from native raw materials. After many experiences, the perfect cooling drink "Bałkantonik”, containing an extract of delicate herbs, lemon juice, tartaric acid, caramel etc.. The basis of the "Balkanton”, as well as other carbonated drinks such as "Albena", „Attaj’ i „Mandatma”, are the famous Bulgarian mineral waters. Nature has shown great generosity to Bulgaria in this regard, which has as many as six hundred mineral springs. They contain a diverse set of chemical components that determine their very diverse activities. So you can use sulfur waters here, alkaline, ferruginous, iodine-bromine, radioactive, etc.. Their temperature ranges from 10, 12 do 103°C.

The fame of the local mineral springs goes back to Roman times. there is even a legend about the "water of life."”, which restored the strength of a weary and sick Roman legionary. Until today you can admire the ruins of the thermal baths (e.g.. in Varna) and swimming pools built here by the Romans with extraordinary splendor, and serving precisely therapeutic purposes. Sometimes places known for healing springs became the seeds of future Bulgarian cities. For example. arose Serdika (Sofia - the oldest city in Europe after Athens), Thermopolis (Burgas - ruins of the baths from the 5th century, p.n.e.), Paulalia (Kiustendił - 40 sources active already in the first century. neither.), Augusta (Hisara - a mineral spa of the 3rd-4th century Roman emperors. neither.), modern Bankia etc..

In all Bulgarian grocery stores and kiosks, there are huge bottles with the inscription "Upper Banya” enable tourists to enjoy the benefits of water that perfectly regulates the digestive tract. So tourists tired of the scorching sun can combine business with pleasure, quenching thirst with this "water of life *".

Very popular fruit drinks are prepared here in Bulgarian homes during the summer season. On a hot day, a peach drink, which we were treated to at home by the pilot of "Bałkantourist", Mimi Czechłarowa, He seemed the most wonderful to us, as we've been drinking in our lives. When tired of a long walk on Sunday, stuffy and dry Varna, we reached Mimi's apartment, a glass appeared immediately on the table, slightly frosted jug with a thick, intensely pink content. Pouring the drink into cups, Mimi was also giving us a recipe for its preparation. So first you need to wash a few of the large ones carefully, very ripe peaches. Then the seeds are removed and the fruit is crushed in a pot. The resulting mass is diluted with water and filtered through a fine sieve. For four glasses of juice, a glass of sugar is added and the juice is squeezed out of the whole lemon.
Milk is also an excellent thirst-quencher–fruit cocktails, which are drunk a lot. In this combination with milk, we liked strawberries and strawberries the most. The fruit is first rubbed through a sieve and drained. 2-3 tablespoons of the obtained juice are poured into the glasses and spread with boiled and cooled milk. Then the cocktail is lightly sweetened and cooled down in the refrigerator.

However, the most popular drink in Bulgaria is yogurt. Due to its thick consistency, "kiseło mliako” most often in hot weather it is drunk in the form of 'ayran”, that is, mixed with mineral water. This drink, which we thought was very risky at first, in practice it turned out to be completely safe.

In all Bulgarian "sugar factories"” you can also buy a glass of booze for a few stotinki, light brown drink, which is a highly appreciated national delicacy. And although today the production of booze has been taken over by industry, apparently it has lost nothing of its value since then, when it was produced by those who were diligent in keeping their secrets "bozajije”. However, it was difficult for us to state this fact, for we were completely unconvinced of the dense and bland revel. Produced from millet, maize and yeast, however, has high nutritional value, and in Bulgaria it is included in the mandatory children's menu, pregnant women and nursing mothers.