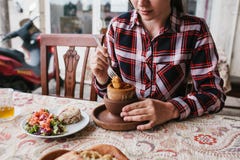 A healthy instinct prompted the Bulgarian, how to eat, to meet the body's needs during hard work, depending on the season. And yes, chops and kebaps” pork belonged to the winter menu, while canned salted meats, how ,,pastyrma” lub „tuning” They were eaten in the summer, when working in heat made the body dehydrated.

Modern Bulgarian cuisine - continuing almost all the principles used in the past - has skillfully adapted them to contemporary conditions. No one is burying pots in hot ashes anymore, but always takes great care, to cook the food over low heat, which allows you to fully preserve its taste and aroma properties.

A classic example of modernizing traditional cuisine recipes is ,,stomna-kebab” (kebap in the pitcher). Once meat, onions, tomatoes, the peppers and spices were placed raw in an earthenware jar, which - after sealing the hole with clay - was buried in the hot ash. When the dish was ready, the jug's neck was simply broken. Today "stomna kebap"” is prepared as follows: the meat is cut into small pieces, searing in fat, and then takes it out of the vessel. The same fat is used to stew young onions - first the heads, then the chives. Tomato puree and flour are added, and when the flour turns golden, he spreads it with water, sprinkling salt, pepper, czubrica and czuszki. Meat is thrown back into the sauce and it is stewed, and when it is soft enough, the kebap is separated into ramekins or clay bowls and tied with moist parchment, and then bake in the oven for a while, until the paper on the ramekins falls.

Bulgarian cuisine takes great care to preserve the natural properties of the products. Vegetables, especially meat, So it is fried here for a very short time, and then stew it with water or broth, until you get the right amount of essential sauce. This is how various kinds of kebaps and "jachnije" are prepared”. The meat is saturated with the smell of vegetables, vegetables absorb fat, the sauce - sweetish from the fried flour and onion - thickens.
There is a fundamental difference in taste between kebap and jachnija. The meat in the kebap is juicier and has less sauce than the meat in the jachnia stewed with vegetables. This sauce has a characteristic reddish color obtained by simultaneously stewing onions and tomatoes in fat, to which flour and ground paprika are also added. Jachnije can also be made without meat - only beans, lentils or squashes.