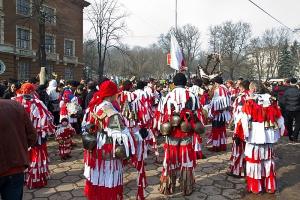 “In the fall, when caravans of carts departed from all over Dobruja to the marina in Balchik and the Batov water mill, they could not avoid Antimov and the Sarandovica inn. Then the happy days started wandering around. Outside, you could see the uncoupled carts, and while the horses were dozing under the blankets, bagpipes played in the inn, there were screams, and from time to time the floor began to tremble, as if she could collapse under the junack ryczenica. As a man walked inside, he could see a blue haze of cigarette smoke rising from floor to ceiling, and among them hubcaps, inverted sheepskin coats and mustache, sun and wind tanned faces. Everyone was talking loudly and - although they were so, what they sat - mostly steel, straightened, with a cup of wine in one hand, with a whip in the other, as if they were ready to go out”.

We are introduced to such an inn by Jordan Jowkow - eulogist of the Dobrogean folklore, old Bulgarian tradition and the beauty of local women, m. in. Albeny, from the name of which the Black Sea spa takes its name. And although so many years have passed since time, when the heroes of his stories were helping themselves to rakija at a roadside inn and, amused, set off to dance together, we are familiar with these images today. In every country inn and the smallest restaurant with an inscription ,,skara-bira ” (grate-beer) after all, we will also find the atmosphere of old times. The same songs will pull strong male voices, and so will, standing, with a glass of wine in hand, in the smoke saturated with the smell of garlic and grilled meat, they will conduct - just as they leave - endless conversations. This atmosphere can also be found in premises consciously styled in rural interiors, which seemed to have been moved alive from old open-air museums. In these low and dark rooms, however, there is nothing of the sleepy atmosphere of an ethnographic monument. Maybe that's why, that the folklore of Bulgaria is still a living phenomenon, that contemporaneity is almost indistinguishable from it, even in the most modern - big city; a stay in a regional establishment is always combined with a relaxed one, fun full of joy.

Bulgarian writers, perfectly developed) gastronomy is full of original ideas. Thanks to them, you can have fun in the old windmill, and in the fold, by Hajduk bonfires and in shepherd's huts. A stay in such an open-air museum has its own special ritual, which is more or less repeated in all such tabernacles.

The first condition, which depends on having fun, is to forget about the daily rush, complete relaxation, sense, that time has stopped. This is what Bulgarians do when they come here for many hours of feasts with their families, friends, and even - despite the often late hour - with the children, which does not shock anyone anyway. Often you can watch a table occupied by a family of three generations.

A stay in such a place should, of course, start with the wine served in clay bowls and some side dishes, e.g.. “Shop's lettuce” or thinly sliced ​​'bows”. Then the main course "kurban-czorba"” or grilled meat, to which is served "Friday” - White, round, still warm roll, which she tears with her fingers, and while eating he dips in "czubricy"” i „mirudii”. A folk band mostly composed of a violin, flute and accordion starts strange, oriental and fascinating melody "hora”. The soloist of the group sets off to dance, dragging waitresses in folk costumes with him, and these - guests; a colorful procession meanders between the tables. And so here every day, late at night…